On Tuesday 16th, the High School Surf League will kick off at Kingtson Beach. Amazingly, even after unfortunately cancelling the 2020 event due to COVID-19, numbers entered this year are exactly the same with the participation at the 2019 event. We have 111 students entered for the Northern event and 144 for the southern. Racing starts at 10am.

Second stop will be the North West Coast with over 100 students participating at Preservation Bay in Penguin. The popular Surf Life Saving Tasmania facilitated High School Surf League event will be hosted by SLSA Club of the Year, Penguin Surf Life Saving Club. Penguin was named club of the year back at the end of last year at the Surf Life Saving Australia National Awards. It recognised the club's ability to reinvigorate itself in recent years in the face of changing times and ageing stalwarts.

The club has boosted patrol numbers, boat-ready members and community engagement by re-opening its clubrooms — overlooking beautiful Preservation Bay — to groups and activities as varied as yoga and tap-dancing…and being host to our High School Surf League event for now 3 years in a row.

This incredibly successful program aimed for high school students has been running for a number of years, growing in popularity and evolving to include a number of new events that further complement the exciting competition program.

“The High School Surf League is all about inclusivity, participation and fun. Ultimately, the program is designed to introduce students to surf life saving skills and competition in a challenging format, enabling students to put their abilities to the test against the surf environment and students from other local schools.

This year’s program will see 12 schools state wide participating. In the south, Mackillop Catholic College and St. Alyoisus Catholic College are tipped to be top point scorers with strong numbers, recent involvement in surf lifesaving schools programs and considering previous years performances. We will also see underdogs Triabunna District School represented and no doubt demonstrating some great performances as a very active school in terms of surf-based activities. In the North, the event really is anyone’s as the event scoring is designed to ensure a level playing field is had as teams with surf club members have two points per student deducted off their overall score. In the north we see many ‘clubbies’ taking part. 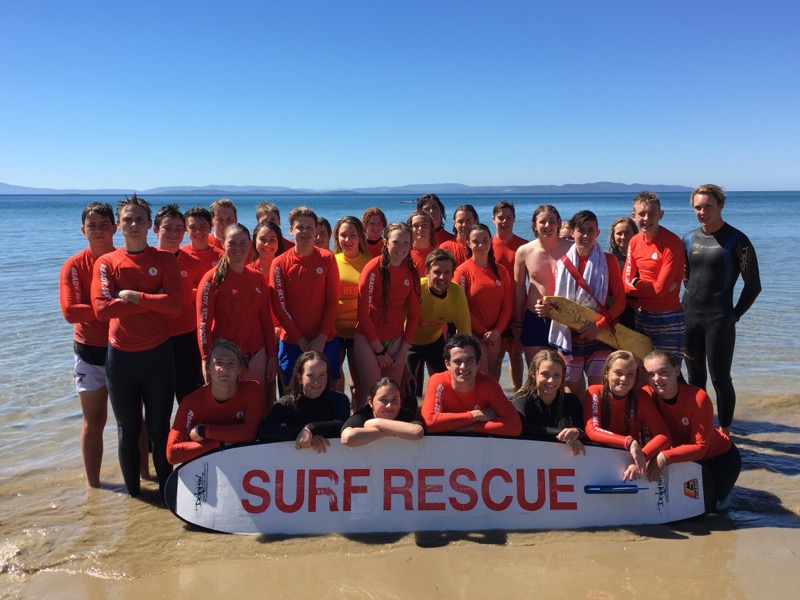