The following awards were presented on the 10th August 2019 at the SLST Awards of Excellence held at the Museum of Old and New Art (MONA).

In 2018-19 Lara was the clubs TRAINEE TRAINING OFFICER for 3 sets of award candidates:   8 Bronze Medallion, one SRC and 10 ARTC and was appointed as CLUB DELEGATE for the assessment of members at annual Skills Maintenance checks

In 2018-19 Lara was appointed as an SLST PATROL ASSESSOR for the North West Coast of Tasmania. This experience meant that Lara learnt the importance of clear communication and how to usefully respond to difficult lifesavers. She also gained valuable ideas from observing the different ways other patrol teams approach tasks and their roles on the beach. She met new people and talked to them about their background in lifesaving. She asked their opinions on what they wanted to have more of in Surf Lifesaving, e.g. many wanted more courses, learning workshops and more information on the new iPad system, etc.

One of my greatest regrets in life is not getting involved in surf lifesaving at an earlier age. Introduced to surf boat rowing in my mid 20s by a friend, I would have loved to have grown up through nippers as a kid. The life and surf skills and knowledge that kids gain today through a quality junior program are invaluable.

Having matured and with kids of my own I realise as a volunteer in surf lifesaving through my actions I am able to have a positive effect on so many across all ages. Whether that is at a club, state or within my community, I’m incredibly proud in the knowledge that by volunteering my time I’m making a difference for the future. By saving a life when on patrol, teaching kids to body surf or spot a rip, securing funding for a clubhouse upgrade. All these small things have a positive cumulative effect. 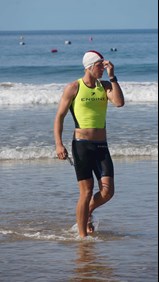 Most outstanding achievement is a personal best of 22 medals at the 2017/18 State Titles including 16 gold medals. This reflects the hard work and effort that I have put in throughout the season, and also highlights the Carlton Park club spirit is alive and well in the seniors again, with a big crew of great u17s competitors working with me to win 11 of these 22 medals in team events.

To be recognized for my efforts is a reflection of my passion for the sport and inspires me to continue to be a leader and motivator in the sport of surf lifesaving in Tassie. I am currently training for my second attempt at the Coolangatta Gold (short course) and to be awarded youth athlete of the year would likely enhance my motivation to continue training hard, which in the cold weather months requires something a little extra! 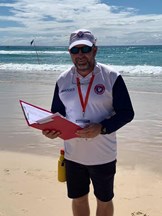 This year I made a commitment to officiate at all Statewide Carnivals, including the championship events.  This year was highlighted by my nomination and acceptance to officiate at the Australian Championships.  Whilst officiating at Nipper carnivals I worked closely with some parents undertaking officials duties for the first time, supporting them to the best of my ability to encourage them to consider being an official in the future.

Attending the Australian Championships enabled me to pick up ideas that could be implemented and work well in Tassie.  My goal next season is to work closely with my fellow officials and SLST to try and implement ideas in our carnivals.  I will also nominate again for next years Australian Championships as I think this a great platform for me to continue to grow and develop as an official.

I remain committed to continue as an official as I have a passion for the role and enjoy working alongside my fellow officials and competitors around the state. 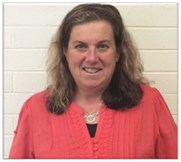 Liz encourages and offers advice to all competing members of our club under 7’s through to masters athletes. She is always around and is able to adapt to her surrounds and the age group of the athletes that she is communicating with. Liz is our go too person for anything relating to carnivals on and off the beach.

Liz is currently the board and open water swim coach at Ulverstone SLSC, along with coaching the senior squad and the U7 age group.  Liz is the clubs Aussies Team Manager, also undertaking a coaching role while the team, a position she has held for over 15 seasons.  Liz was also the SLST Interstate Team Manager for 2018-19. 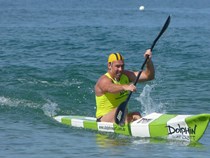 Winning his first Open Single Ski Championship at this year’s State Title would be Stephens greatest achievement for the season.  To be awarded Athlete of the Year would be a great honour.  I feel it is my duty and responsibility to keep competing at the highest level and devoting myself to completing at the highest level to inspire the younger generation to be the best that it can be.  I truly love surf lifesaving and owe a great deal to the organisation that has given me so much.  I am disappointed that I was not able to make any Open finals at the Australian Championships this year, however, this has given me more drive and determination to go bigger and better next year and help to continue to drive in the right direction for success. 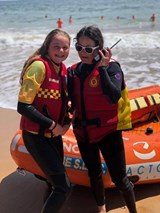 During the course of 2018/19 I consulted and collaborated with trainers and assessors from surrounding NW Coast clubs in order to provide increased opportunity, availability and most importantly flexibility for candidates across a range of awards.

We provided a combination of weekday training sessions, weekends and public holidays across 3 different beaches in order to make the most of the trainer and assessor availability.  Galvanising and supporting club members and utilising the skills, knowledge and experience across a range of trainers and assessors has created a supportive environment at both intra and inter club level. 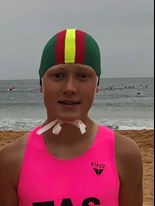 He took his role as Nipper Club Captain seriously and took pride in being involved in not only the Nipper activities, but in the club as a whole.

Lachie’s strengths are his maturity, motivation and desire to be involved. He competed in every carnival this season, and once permitted, he also joined in the senior carnivals. He was our only under 14 male competitor, and was rarely able to compete in team events, yet he persisted in his individual events rarely being one of the top 6 finishers. Yet, he was keen to be involved in the State Team travelling to New Port, NSW and his willingness to put his hand up paid off when other children declined their opportunity to be involved.

Zia has had a very successful 12 months with the Surf Lifesaving movement, obtaining various new awards, participating in competitions to a consistently high level and has further strengthened her leadership skills through undertaking the role of Leader at the Development Camp.

Zia has been a strong patrolling member of the club undertaking over 50 hours of patrolling for each of the last 2 seasons, undertaking water safety with nippers and at other outside events and made herself available to assist on the beach by age managing the u14 age group.  As Vice Captain of her patrol group, Zia conducted various first aid related scenarios with all the patrolling members of the club to ensure that every patrolling members skills are continually being honed and preparing them for a potential real life incident.  She has also taken on the role of Training Officer with Club, and with assisting with the training of SRC and Bronze Medallion trainee sessions and undertaking the role of Age Manager for the U14 age group. 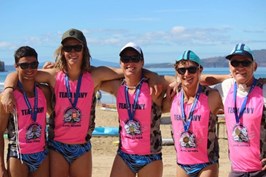 The most outstanding achievement by this crew in 2018-19 was their performance at the ASRL Open at Elouera.  The boys had raced in the U19 division the previous year (in cyclonic conditions) but did not get a real feel for racing because of the conditions. This year the crew were able to race in superb conditions and very competitively finishing 10th in the qualifying rounds. The crew were quarter finalists at this event, this confidence boost set them up for the rest of the season culminating in there convincing win in the Open Mens Boat Final at the State Championships. 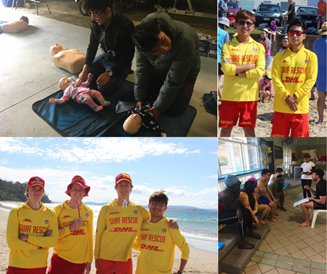 The Lifesavers without Limits program was established to allow all members of our community to engage in surf lifesaving in an inclusive and culturally aware manor. Kingston Beach Surf Lifesaving Club have always prided themselves on being an inclusive club who welcoming members from a diverse range of backgrounds and abilities.

Trainers from the KBSLSC had in the previous season worked closely with the Migrant Resource Centre of Tasmania on summer holiday programs to familiarize newly arrived families from a refugee background on water safety and a beach safety session with Multicultural Youth Tasmania (MYT) clients. A 10-year study of drowning deaths in Australia from 2004 to 2015 by Royal Life Saving Australia has revealed that 30 per cent of those who drowned were born overseas. This staggering statistic, along with our participation in the familiarization program made us realise the need to provide a welcoming and culturally responsive environment to educate young people from Culturally and Linguistically Diverse (CALD) backgrounds.

Representatives from KBSLC then participated in MRC Tas “Engaging CALD Youth in Sports” training. This training provided the participants with increased knowledge and skills to understand how to engage CALD youth in sporting activities, included difficulties that may present. 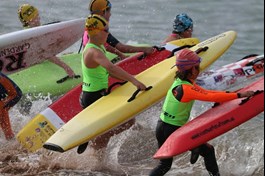 The primary purpose of the IronOcean series is to encourage young girls and boys to get out, exercise and experience surf conditions in a safe environment.  We want to provide them with an opportunity to race as well as have fun and meet new friends.

The IronOcean is a combination of 3 Ironman rounds and one Ocean swim round.

Feedback from parents and competitors has been overwhelming.  They loved the competition, conditions and most of all the structure and speed of the overall event.